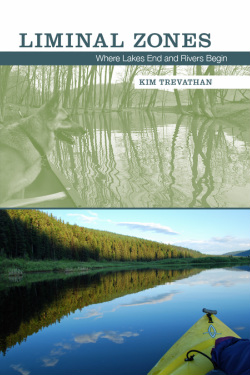 Liminal Zones: Where Lakes End and Rivers Begin, May 2013, University of Tennessee Press. After the death of my paddling companion Jasper, a German  shepherd/Labrador retriever mix, I began a series of solitary upstream quests  in search of what I call liminal zones, the point where the river that feeds a  lake revives itself against the influence of a dam, where the bottom comes up and the current is felt and seen.
​     I describe the ecological and esthetic differences between a dammed reservoir and a free-flowing river, and explore the implications of what these places represent: a reassertion of pure,  unadulterated nature over bodies of water that have been engineered.  My quest included a loop around the entire country in 2008—including the Tippecanoe (Indiana), the Clearwater (Montana), the Deschutes (Oregon), the Rogue (Oregon) and the Dolores(Colorado)-- as well as adventures on  southeastern rivers such as the Edisto, the Big South Fork, the Nantahala, and the Tellico.  Each excursion  yielded something different and unexpected, from a near-drowning in the Rogue River to a mysterious fog bank that arose across the Nantahala at midday. In the book, divided into sections representing different kinds of rivers, I progress from solitary voyages to excursions with friends—human and canine-- and foray into night paddling, a transformative experience in terms of esthetics, perception, and  memory.  Ultimately, the book is an  inquiry into what makes certain places special to us, why some are set aside and protected, others not, and how free-flowing water is valuable to our culture,  our history, and our physical and spiritual health.

Paddling the Tennessee River: A Voyage on Easy Water, published by the University of Tennessee Press, 2001.  In 1998, my dog Jasper and I paddled the length of the Tennessee River, from Knoxville to Paducah, Ky., around 652 miles. The idea behind the voyage was to rediscover the river, which has been submerged by nine dams, and to reacquaint people with its former free-flowing incarnation and the historical events that took place along its banks.  We crossed the path of the explorer Meriwether Lewis along the Natchez Trace, made a stop at Shiloh, and scooted past Hiwassee Island, the spot where a  teenaged runaway named Sam Houston lived with Cherokee Chief  Jolly.
We also  came to know the modern river’s dwellers, including a towboat pilot, two couples who traded in their landlocked homes for  life on the river, a campground owner,  and a meteorologist for NASA. We locked through nine dams without incident. I couldn't have asked for a better traveling companion than Jasper, a German shepherd/Golden lab mix, who made many friends along the way, who was cool and observant in the face of storms, monster boat wakes, wilting heat, and less-than-optimal camp sites.

From Sue Lowery, co-author with her husband Ron of forthcoming book Tennessee River: Sparkling Gem of the South: "Your book, Paddling the Tennessee River, was a tremendous inspiration for us. I have to say, I have dog-eared multiple pages as I read it, exclaiming, "Yes! I never understood the Tennessee River before." Your insight into the river—its history and its story was eye-opening."

Coldhearted River: A Canoe Odyssey Down the Cumberland, published by the University of Tennessee Press, 2006.  In 2003, photographer Randy Russell and I paddled down the length of the Cumberland, about 700 miles, from Harlan, in eastern Kentucky, down through Nashville, and back to western Kentucky, where the Cumberland meets the Ohio River. Randy and I experienced the raw, dramatic beauty of the Cumberland, and also overcame some challenges it put up in our way. A fifteen-hour rain downstream of Wolf Creek Dam raised the river eight feet overnight, and a thunderstorm blew 60-mile-per-hour winds, forcing us to seek
refuge under their canoe near a cornfield. We met many who helped us: a fisherman portaged us and our boat around a low-head dam near Pineville, and Vic Scoggin-who swam the length
of the Cumberland in 1996-met us at Salt Creek Campground in Middle Tennessee and cooked us a fried chicken dinner. Coldhearted River explores the river's past, invoking the ghosts of the Shawnee and Cherokee, Daniel Boone and the French fur trappers who arrived before him, early settlers of Kentucky and Tennessee, such  as James Robertson and John Donelson, and a binge-drinking ex-farmer named Ulysses Grant, who won his first significant battle at Fort Donelson, early in the Civil War. 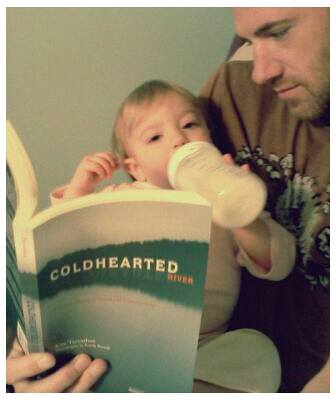 Walking on Water and Other Stories is a collection of short stories by graduates of the University of Alabama's MFA program.  Mine is the title story.  It's the first fiction I published.
Powered by